Q & A with Anju Gattani | Author 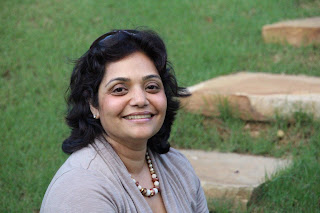 Fiction author, international freelance journalist, and former news reporter, Anju Gattani has been published in leading publications in the U.S., Singapore, Hong Kong, and India. Her debut novel, DUTY AND DESIRE, was published in 2011. Anju is represented by Bob Diforio, D4EO Literary Agency, and writes fiction to bridge cultures and break barriers. She is currently at work on her third novel in the WINDS OF FIRE series.

Literary Juice: According to your biography, you were first published at the age of seven. At what age did you know you wanted to be a writer? Do you remember what it was that commenced this desire?

Anju Gattani: I will never forget that moment, the thrill of seeing my poem with my name and age printed in Hong Kong’s English leading newspaper, South China Morning Post!!  Yes, I was seven at the time and I continued to write poems, submit entries and win essay competitions too. But I didn’t realize I wanted to be a writer, a professional writer, until much later… in my early 20s. I enrolled in a journalism / creative writing course in Australia, began to get real feedback on my assignments from published authors along with a lot of encouragement. And that’s when the real journey began.

I was published and received my first check by an English language women’s magazine in India for short fiction in 1994. I also began freelancing for New Woman magazine in Mumbai, then added two more (Singapore Women’s Weekly, Motherhood) in Singapore and an expatriate magazine in Hong Kong to my list. I was juggling the freelancing while raising two boys and globe-trotting (because of my husband’s job) from India to Singapore, Australia and the U.S.A..

LJ: Your debut novel, Duty and Desire, is unique in the sense that its story has rarely been done by anyone else. Not only that, it has been well-received on Amazon, and lauded by New York Times Best-Selling Author, Haywood Smith. When did you first realize this story needed to be told, and why? How have your own experiences helped shape its narrative?

AG: The story and characters actually found me… back in 2000 / 2001 shortly after we moved from Singapore to the U.S. I was taking a nap one afternoon (an exhausted mom of a then 2 and 6 year old boys) when I woke up sweating, my heart ready to burst from my chest. I’d had a vivid dream that felt like a movie in real-time. I had never seen or experienced anything like this before and knew it wasn’t another article or short fiction story waiting to be told. This was different. Something bigger and definitely more complex. I had no clue what I was dealing with but since the scope of the visual was colossal, like a movie, I figured it might be a bigger story. After much research on ‘writing the novel’ I realized it might well be a fiction novel. However, when I started writing the manuscript that’s when the novel grew more complex. The story didn’t fit in one book or two… I learned I was dealing with a series.

LJ: Who is your target audience? What is it you hope to convey through the pen?

AG: I’d say women from 18+ since the books fall under cross-cultural women’s fiction. However, at previous book club meetings I’ve had a few men attend the event and the topics and discussions have widely piqued their interests. That has been such a welcome surprise… to know that what you are writing touches the hearts and lives of men and women from diverse cultures and backgrounds.

I hope readers will enjoy Sheetal’s story and realize never to give up. Sometimes we feel trapped, boxed-in with no way out of a situation, but there is always a way out and forward. You just have to take a different approach… a new perspective.

LJ: What does a typical day writing look like for you? Do you ever experience writer’s block, or any obstacles that impede your work? What are some strategies you employ to help overcome these obstacles?

AG: I also have a part-time day job so I try to fit the writing in chunks of pre-allocated time. However, life has a tendency of throwing surprises and that means a lot of juggling. I’m also huge into fitness and working out so I usually begin my day with a 1-hr workout at the gym - this also helps get the creative juices flowing and ideas running. Once I’m showered and dressed I sit down and write. I’ll take a break for lunch and then continue writing again. But ‘writing’ can also diverge into re-writing, revisions, edits or research. So it can be a combination of several different factors and no 2 writing days are the same.

Research can slow down the momentum of the story if I haven’t sufficiently tackled it or don’t have a good enough handle on the issue I’m dealing with. I’d like to ‘knock on wood’ when I say I’ve not yet experience writer’s block. What I continue to battle however, is finding the right word or combination of words to say exactly what I mean. It can really be frustrating!

Strategies that have worked for me can range from dark chocolate to coffee breaks to simply taking a break. Breaking off from the pressure of the moment, getting out of the hot-seat and doing something else for a while is usually the best remedy.

LJ: Are you currently working on any new projects? What can readers look forward to from you in the future?

AG: I’ve just signed a 3-book deal with Scarsdale Publishing, NY, and we’re moving full-steam ahead with the Winds of Fire series. I’m currently working on the third book and all 3 are slated for 2018 / 2019 releases.

Purchase this Book
Fiction by ANJU GATTANI
Publisher: Greenbrier Book Company, LLC
ISBN-10: 193757301X
ISBN-13: 978-1937573010
304pp
About this Book: How Can Happiness Survive When Duty Clashes With Desire? Sheetal Prasad has it all: youth, beauty, wealth, and education. But when this modern Indian woman surrenders love for honor and marries into India's most glamorous "royal family," those very advantages turn against her.

Thanks for visiting our blog! Ya'll come back now, ya hear?

Promote Your Page Too